TIPS:
1. WRITE THE TITLE AND UNDERLINE
2. WRITE IN 3 PARAGRAPHS (MINIMUM, BODY CAN BE MORE THAN 1 PARA)
3. 1ST SENTENCE WRITE THE TYPES OF GRAPHS/DIAGRAMS/HEADLINES ETC.
4. 2ND SENTENCE WRITE THE MOST OUTSTANDING POINT
5. BODY - WRITE ONLY INFORMATION THAT IS OUTSTANDING (KEY FEATURES, NOT FEATURES.. FEATURES JUST MEANS EVERY SINGLE POINT, YOU NEED TO BE SELECTIVE IN CHOOSING THE MOST IMPORTANT ONES ONLY)
6. CONCLUSION IS JUST ONE SINGLE SENTENCE AS SUMMARY.
7. ALL WORDS AFTER 200 IS NOT CHECK/READ/EXAMINED. EXAMINERS WILL NOT READ AFTER THAT SO STICK TO THE WORD LIMIT.
8. TRY TO LINK ALL THE INFO AND EXPLAIN IT IN A SIMPLE BUT EFFECTIVE WAY.
9. TITLES ARE CONSIDERED 1 WORD (BUT I COULD BE WRONG)
10. GOOD LUCK, AND ALWAYS ANSWER THE ESSAY QUESTION FIRST BEFORE TRYING TO WRITE THIS REPORT. 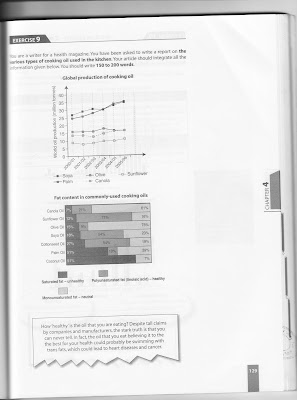 The Various Types of Cooking Oil Used in the Kitchen

The stimuli present a line graph on 'Global production of cooking oil (2000-2006)', a bar graph on 'Fat content in commonly-used cooking oils' and an article excerpt on the healthiness of oils. In general, palm oil is the most produced oil while the least produced but healthiest option is sunflower oil.

According to the line graph, the highest world oil production is palm oil increasing steadily from 25 million tonnes in 2000/01 to 35.5 million in 2005/06, beating soya oil by a small margin. Among the 5 types of oil, sunflower has the lowest production stabilising at just under 10 million tonnes from 2000 to 2006. Based on the bar graph, the healthiest oil is sunflower because it contains the second lowest fat (12%) content and the highest healthy polyunsaturated fat (71%). This is followed by other healthy oils with lower fat like canola (7%), olive (15%) and soya (16%). The unhealthy oils are very high in fat and very low in polyunsaturated fat such as palm oil (51%) and coconut oil (91%). The article states that we cannot be sure about how healthy the oils we eat are because it may contain too much trans fats leading to heart diseases and cancer.

In conclusion, coconut and palm oil should be avoided because fo the high fat content while the healthiest oils are sunflower, canola, olive and soya. 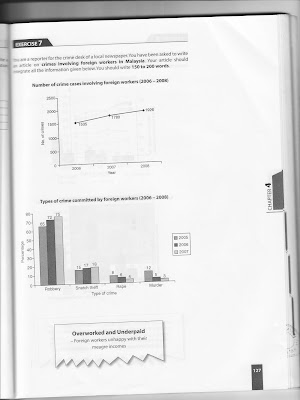 According the the line graph, every year the number of crimes increases by about 200 cases which is 1535 in 2006, 1780 in 2007 to 1926 in 2008). These crimes can be divided into petty crimes including robbery and snatch thef and hardcore crimes like rape and murder. Based on the bar graph, the highest incidence of crime is robbery that rose from 65 in 2006 to 75 cases in 2008. This is followed by snatch thefts from 15 in 2006 to 18 cases in 2008. Conversely, rape and murder cases have reduced drastically by 50% or more from 2006 to 2008. The reasons given for the increase of crimes in the headline are that foreign workers are unhappy with their meagre incomes which result in them being overworked and underpaid.

In c onclusion, foreign workers are committing more petty crimes like robbery and snatch theft because they are overworked and underpaid.
Posted by Audrey Wiles at 6:00 PM

TQ for Being Visitor No:

Audrey Wiles
Papar, Sabah, Malaysia
a homemaker, an English language specialist and a semi-pro baker.. haha.. what a combination!